33. James IV - The Act of Dispensation

On 24th August 1513, just two days after crossing into England, James IV held what was to be his last Council with the assembled nobility and clergy at Twizelhaugh, where what became known as the Act of Dispensation was passed.

For the heirs of those who died in battle for the king, this Act waived the payment of various monies which would normally be required from them on inheritance. Importantly for some heirs it also applied whatever their age, even if they were a minor when their superior perished while fighting. Whether James’ agreement to these provisions was out of benevolence, in recognition of the sacrifice many might make or simply to encourage his followers is not clear, but it certainly indicates that he was anticipating the battle. This was an Act of the Lords of Council rather than of the Scottish Parliament and there is a manuscript version from that time held in the National Records of Scotland.

A fairly free transcription of this into modern English is:

At Twizelhaugh in Northumberland the 24th day of August the year of god 1513, it is decreed and ordained by the King’s highness with advice of all his lords being there at the time in his assembled army in this form as follows. That is to say, if any man is killed or mortally wounded in the King’s army by Englishmen, or dies in the army while it is in action, his heir shall have dispensation of ward, relief and marriage from the King, whatever his age is. And ordains the King’s assent hereupon to require this to be put into effect.

The title page of this book reads:

The ‘Acts of Parliament, Black Acts’ title page (1566) and page with the Act of Dispensation

The text specifies that the relaxation of the normal arrangements for inheritance covered ‘ward, relief and marriage’:

A much later transcription of the act can be found in ‘The Acts of the Parliaments of Scotland’, edited by T Thomson and published in 1814. The preface to this book says:

“The Acts of the Parliaments of Scotland contained in this volume, have been drawn chiefly from records preserved in His Majesty’s General Register House, but partly from other sources, of inferior quality indeed . . .” 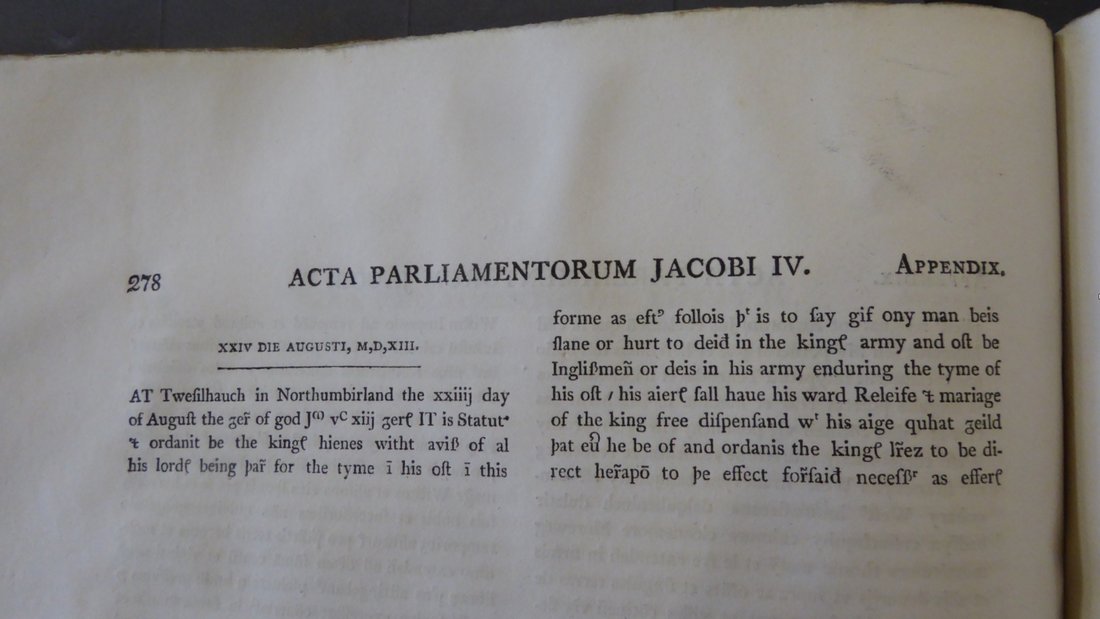 Where there are gaps in the ‘preserved’ records, these are indicated and it seems that at the time the book was prepared it was possible to refer to a more or less contemporary manuscript version of the act rather than ‘other sources’, one of which was the 1566 compilation described above. It seems most probable that Thomson worked from the version in the Acts of the Lords of Council. While the bulk of the 1814 transcription of the act is very similar to that from 1566, the later one contains contraction marks and scribal abbreviations which would confirm that it was produced with reference to an original manuscript and not the 1566 version. The 1566 version appears to be not a precise transcription but contains elements of ‘translation’ or interpretation, such as the way the date is presented at the start; this could have been required because of the limitations of sixteenth century printing and to follow the printing conventions at that time. The 1814 transcription is a truer version. So the easily made assumption that an earlier transcription will always be more accurate than a later one would appear to be false in this case.

Unsurprisingly, there are a number of documented examples of people taking advantage of what the act offered; they are spread from Ayrshire, Peeblesshire and Midlothian to Perthshire and Angus, illustrating the wide catchment area of those who came to support James IV and subsequently died in the battle. Perhaps less expected are the series of very similar acts of the Lords of Council in the context of what are much more local issues. Thus, in March 1517/18 when dealing with ‘rebellis tratouris’ in the Merse [i.e. Berwickshire] an act says:

‘..... gif ony man hapnis to be slane or hurt to deid now in the army to pas in the Mers apoun the kingis rebellis and tratouris be the saidis rebellis or be Inglismen that thar aieris sall have the samyn privelege and eftir the tenour of the act maid at Tuisilhauch in Norththumbirland.’

And in 1528 when Lord Hume was also tackling ‘tratouris’:

And the Act of Dispensation itself was still being referred to in an inheritance case from February 1565/66 which is recorded in the Register of the Privy Council of Scotland, involving the Halkheid family in Fife which lost David Halkheid who ‘wes slane at the Feild of Flowdoun’:

‘..... and eftir his deceise be vertew of ane act maid in favouris of the wyff and barnis of thame quha wes slane at the said Feild.’

So overall this short and simple act had both an immediate impact in the aftermath of Flodden and extended its reach well into the future.

The staff at the National Records of Scotland provided essential help and guidance and I am particularly grateful for the inputs from Dr Alan Borthwick.