To commemorate the five centuries which have passed since the Battle of Flodden in 1513, a major four year project known as the Flodden 500 Project started in 2013, with substantial Heritage Lottery Funding.

The project has many facets, including archaeological excavations, surveying, geophysics, metal detecting and transcribing and interpreting 16th century documents. This last activity is being undertaken by a team of around forty volunteers, under the expert tuition and guidance of Linda Bankier, the Berwick Archivist. Amongst the wide-ranging variety of documents being studied are those concerned with the Berwick Garrison, the Quarter Sessions, Articles of the Battle and correspondence between King Henry VIII and his representative in NE England. Some of the documents have not previously been transcribed and so new information is being revealed regarding the background to the battle and the local social conditions at that time. In due course the findings will be analysed and published.

Portrait of Walter Scott by Sir Henry Raeburn
Reproduced by courtesy of the Faculty of Advocates Abbotsford Collection TrustI joined the group of transcription volunteers when it was established early in 2013 and have found the work interesting, rewarding and definitely very challenging. The varied handwriting styles and conventions, coupled with idiosyncrasies of letter formation and word contractions, make reading many of the documents difficult, but practice and patience usually lead to success in the end. As well as tackling the documents presented to us in the project, I looked to see if there were others which might be of interest contained in the National Archives of Scotland, which are housed in Edinburgh.Here I came across a letter written by Sir Walter Scott to his friend William Clerk of Penicuik in August 1792 while Scott was spending some time in North Northumberland. As well as giving an insight into how some people spent their leisure time then, the letter also has Scott’s forthright views on the Battle of Flodden. A transcription of a portion of the letter has been published previously, in one of Frank Graham’s booklets on Northumberland, but this did not include the section referring to Flodden.

Below is my transcription of the full letter, which is written in a reasonably clear and consistent hand. In the transcription I have ignored line ends and original text deletions, but I have retained Scott’s spelling and punctuation. Where he has abbreviated or contracted words I have inserted additional letters in square brackets.

Behold a letter from the mountains for I am very snugly settled here in a farmers house about 6 miles from Wooler in the very Centre of the Cheviot hills in one of the wildest finest romantic situations which your imagination fertile upon the subject of cottages ever suggested – And what the deuce are you about there methinks I hear you say – Why Sir of all the things in the world – drinking Goats whey – not that I stand in the least need of it, but my Uncle having a slight cold & being a little tired of home, asked me last Sunday evening if I would like to go with him to Wooler & I answering in the affirmative, next mornings sun beheld us our journey thro’ a pass in the Cheviots on the back of two special nags & man Thomas behind with a portmanteau & two fishing rods fastend across his back much in the stile of St Andrews cross – Upon reaching Wooler we found the accomodations so bad that we were forced to use some interest to get lodgings hire where we are most delightfully appointed indeed. To add to my satisfaction we are amidst places renownd by the feats of former days, each hill is crownd with a tower or Camp or Cairn & in no situation can you be near more fields of battle. Flowden Otterburn, Chevy Chase Ford Castle Chillingham Castle Copland Castle1 & many another scene of blood are within the Compass of a forenoons ride. Out of the brooks with which these hills are intersected we pull trouts of half a yard in length as fast as we did the perches from the pond at Pennycuik, & we are in the very country of muirfowl – Often as I have wishd for your company I never did it more earnestly than when I rode over Flodden edge (I know your taste for these things) & could have undertaken to demonstrate that never was an affair more compleatly bungled than that days work was. Suppose one army posted upon the face of a hill & secured by high grounds projecting on each flank with the river Till in front, a deep & still river winding through a very extensive valley calld Milfield plain & the only passage over it by a narrow bridge which the Scots artillery from the hill could in a moment have demolishd. Add that the English must have hazarded a battle while their troops which were tumultuously levied remaind together, & that the Scots behind whom the country was open to Scotland, had nothing to do but to wait for the attack as they were posted. Yet did two thirds of the army actuated by the perfevirdum ingenium Scotorum2 rush down and give an opportunity to Stanley to occupy the ground they had quitted by coming round over the shoulder of the hill, while the other 3[r]d under L. Hume keeped their ground & having seen their king & about 10,000 of their countrymen cut to pieces retired into Scotland without loss: for the reason of the bridge not being destroyd while the Eng[lis]h passd I referr you to Piscottie3 who narrat[ed] at large & to whom I give credit for a post accurate & clear description agreein perfectly with the ground – My Uncle drinks the whey here as I do every since I understood it was bro[ugh]t to his bedside every morning at 6 by a very pretty dairy maid .-. So much for my residence, all the day we shoot fish walk & ride dine & sup upon fish struggling from the stream & the most delicious heathfed mutton, barn door fowls poyes4 milk cheese etc all in perfection: Is a much simplicity resides among these hills that a pen (which could write at least was not to be found about the house, tho belonging to a considerable farmer, till I shot the crow wt: whose quill I write this epistle – I wrote to Irving before leaving Kelso poor fellow, I am sure his sisters death must have hurt him much, tho’ he makes no noise about feelings yet still streams always run deepest. I sent a message by him to Edie5 poor devil adding my mite of consolation to him on his affliction – I pity poor Geo:6 who is more deserving of compassion being his first offence – write soon and as long as your last you will have perthshire news I suppose soon. Jamies adventure did diverted me much. I read it to my uncle who being long in the India service was affronted. remember to James when you write & to all your family & friends in general. I send this to Kelso – you may direct as usual my letter will be forwarded – adieu au revoir. 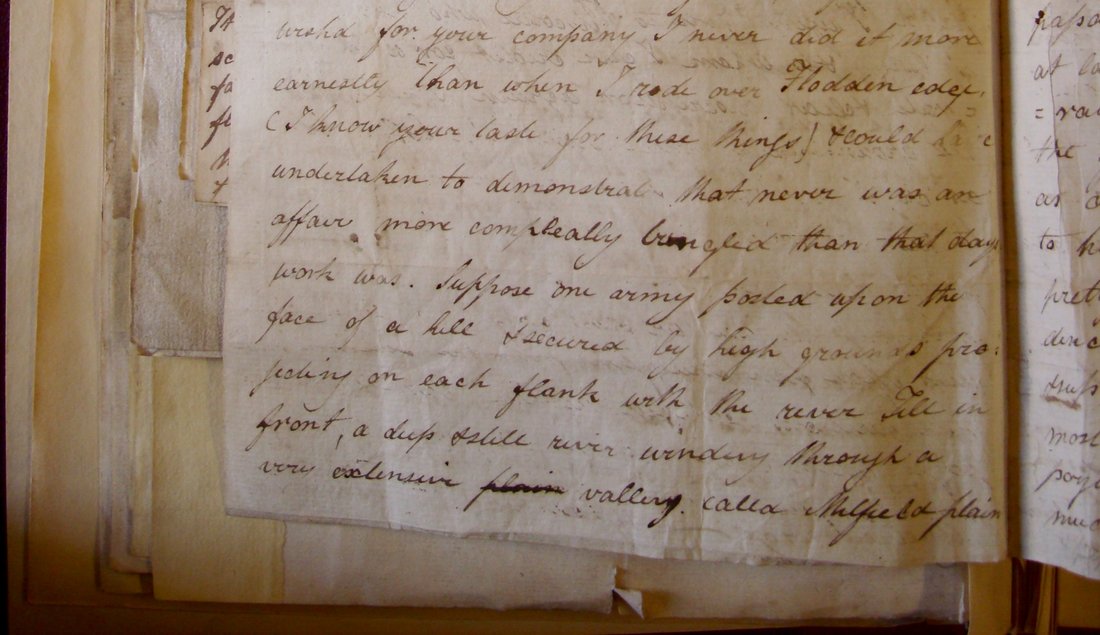 We would like to thank the Berwickshire Naturalists’ Club for allowing us to reproduce this article. I am grateful to the ever-helpful staff at the National Archives of Scotland and to Linda Bankier for her on-going support during the transcription project. The letter, although now residing in the Archives, is the property of Sir Robert Clerk of Penicuik and he has kindly given permission for this article to be published.